“Gig workers are American workers, too. And attempts to reclassify them should be challenged head-on.” – Gabriella Hoffman, self-employed entrepreneur

As the U.S. labor market continues to struggle with a historic labor shortage in the post-COVID economy, we are getting a clearer picture of where the workers have gone.  New Department of Labor data show they are leaving the nine-to-five job market to become their own bosses, expanding the so-called gig economy. While conservatives applaud this as a sign of a healthy capitalist economy, Democrats are seeking to eliminate those jobs.

According to the Wall Street Journal:

The number of unincorporated self-employed workers has risen by 500,000 since the start of the pandemic, Labor Department data show, to 9.44 million. That is the highest total since the financial-crisis year 2008, except for this summer. The total amounts to an increase of 6% in the self-employed, while the overall U.S. employment total remains nearly 3% lower than before the pandemic.

Entrepreneurs applied for federal tax-identification numbers to register 4.54 million new businesses from January through October this year, up 56% from the same period of 2019, Census Bureau data show. That was the largest number on records that date back to 2004. Two-thirds were for businesses that aren’t expected to hire employees.

This year, the share of U.S. workers who work for a company with at least 1,000 employees has fallen for the first time since 2004, Labor Department data show. Meanwhile, the percentage of U.S. workers who are self-employed has risen to the highest in 11 years. In October, they represented 5.9% of U.S. workers, versus 5.4% in February 2020. 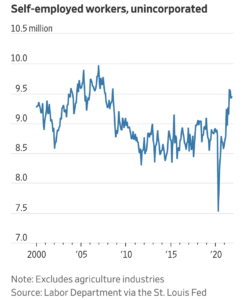 Americans for Limited Government President Richard Manning said this shows that America’s entrepreneurial spirit is alive and well and reflects Americans’ love of independence and freedom.

“This is capitalism at work,” Manning, who served in the George W. Bush administration in the Labor Department, explained. “And because Democrats in recent years have focused on dismantling capitalism, it’s no surprise Joe Biden and Democrats in Congress are trying to eliminate these small business jobs and force independent contractors back into employee status. Ultimately, Democrats want to ensure these workers unionize and pay union dues.”

Manning pointed to a 2019 measure in California, Assembly Bill 5, which largely banned companies from hiring freelance workers such as ride-share drivers. Manning said the law was so unpopular that a year later the citizens of California passed Proposition 22 to protect the jobs of independent contractors.

Undeterred, Democrats at the national level have introduced the PRO Act, which they claim would “restore fairness” to the economy.  In fact, it is a Trojan horse designed to quash our nation’s burgeoning independent workforce.

Self-employed entrepreneur Gabriella Hoffman of Alexandria, Virginia, has been an outspoken critic of Democrat’s attacks on independent workers.

Hoffman wrote in Townhall, “Very few freelancers want to be reclassified. In fact, they don’t want to be liberated from flexibility.

“Gig workers are American workers, too. And attempts to reclassify them should be challenged head-on.

“Much to the chagrin of regulators, independent contractors, moonlighters, contingent workers, and other freelancers—all 59 million of us— are here to stay. And you’ll be hearing more from us.”

The pandemic spurred some people to “pause and re-evaluate their priorities,” Aaron De Smet, a McKinsey & Co. senior partner and consultant on labor trends told the Wall Street Journal. “When you have a big event where everybody takes stock, and trends are already in place, people working for an employer never thought of doing freelance but now when [they] think about it, why not?”

Marcus Grimm, a 50-year-old in Lancaster, Pa., worked at advertising agencies from the time he finished college. Grimm told the Wall Street Journal that for years he toyed with freelancing. “I had always considered it, but literally just never had the guts to make the move,” he said. “I was scared I would lose sleep every night worrying about my next dollar.”

Early in the pandemic, Mr. Grimm, a married father of two grown children, was laid off. He logged onto Upwork, a website that connects freelance workers from a wide range of industries with potential clients. He fielded several assignments doing ad campaigns for big companies, charging a low hourly rate.

His favorite part is not having to deal with corporate politics or any bureaucracy. He can go kayaking in the middle of the day.

One client offered to hire him full-time, but he declined, Mr. Grimm said. “I told them, ‘I’ve seen the light.’”

Democrats managed to slip in a key element of their PRO Act into their Build Back Better bill that would benefit unions. In fact the Biden bill would effectively end state right to work laws as it seeks to compel dues whether someone wants to be a member or not.  Additionally, a Big Labor supported provision which ends secret ballot union elections is also thrown into the vile stew of Biden’s budget busting big government wreckonciliation bill.

“That’s just one more reason to reject this massive spending bill,” Manning concluded. “It would quash the entrepreneurial spirit of Americans to benefit labor unions. The more we know, the more it is clear that this bill is a disaster cocktail that would poison the American free enterprise system.”

Catherine Mortensen is Vice President of Communications at Americans for Limited Government.

This post, Democrat War on Entrepreneurs, was originally published on The Daily Torch.

The Junk Asset Class Yet To Implode

One Year After His Death, John McAfee's Corpse Still Being Held By Gov't, Fueling Claims Of 'Cover Up'